Brody & Nick is the newest title in the Something About Him series by A.D. Ellis

Brody & Nick is available for a special preorder price of just 99¢ on all platforms. 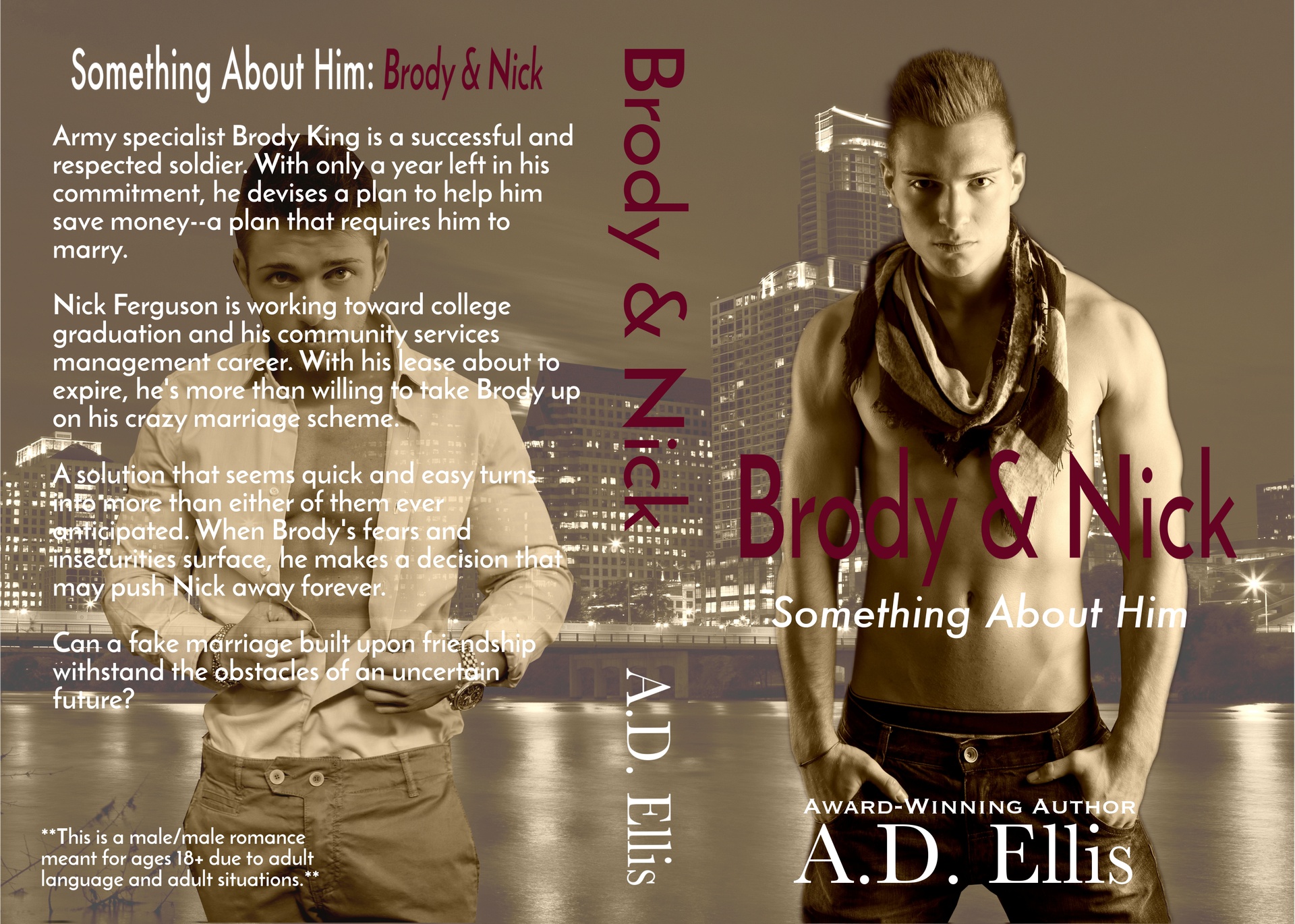 Other books in the series:

Find the FREE short story (Bryan & Jase: The Beginning) on Amazon and iBooks 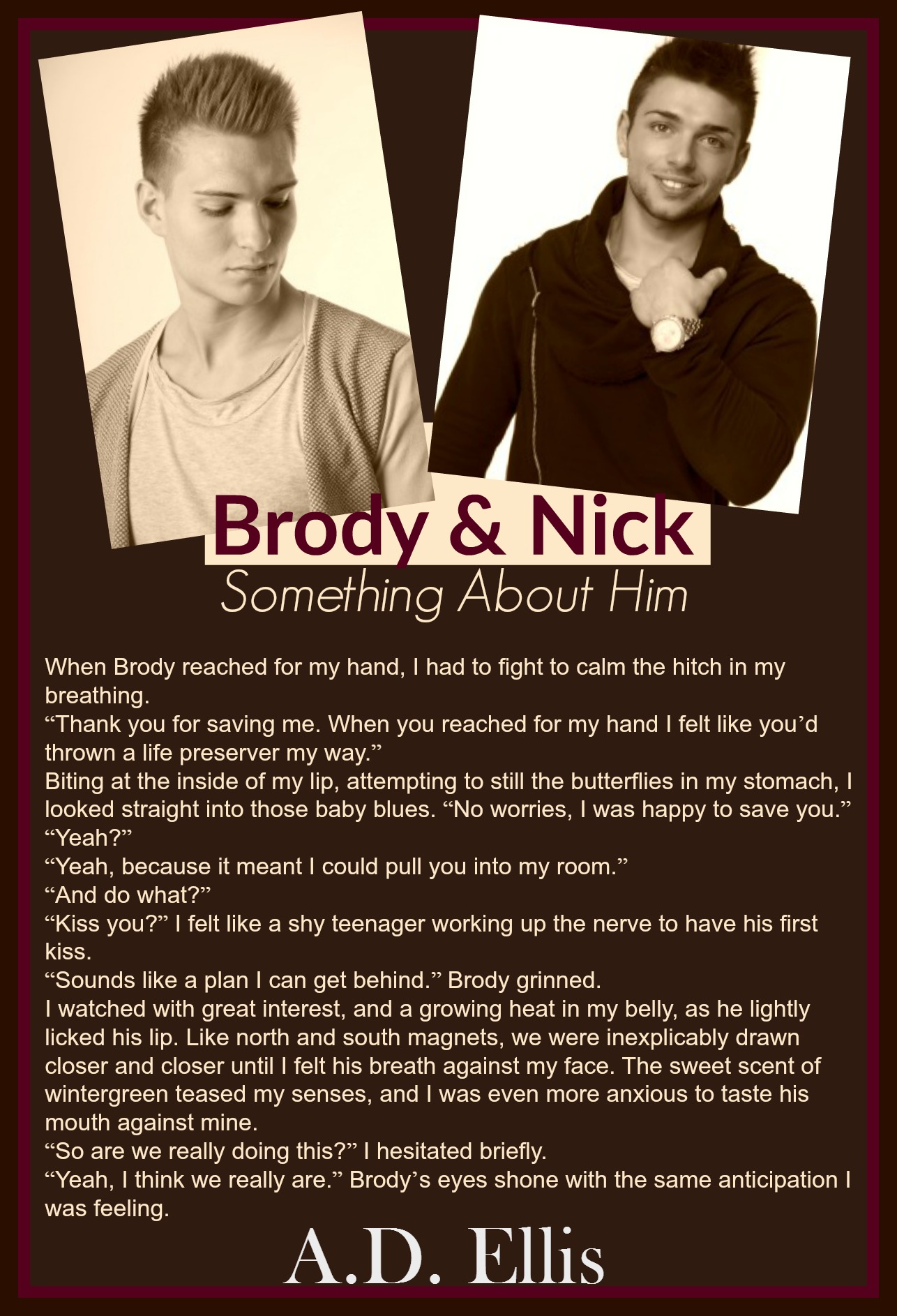 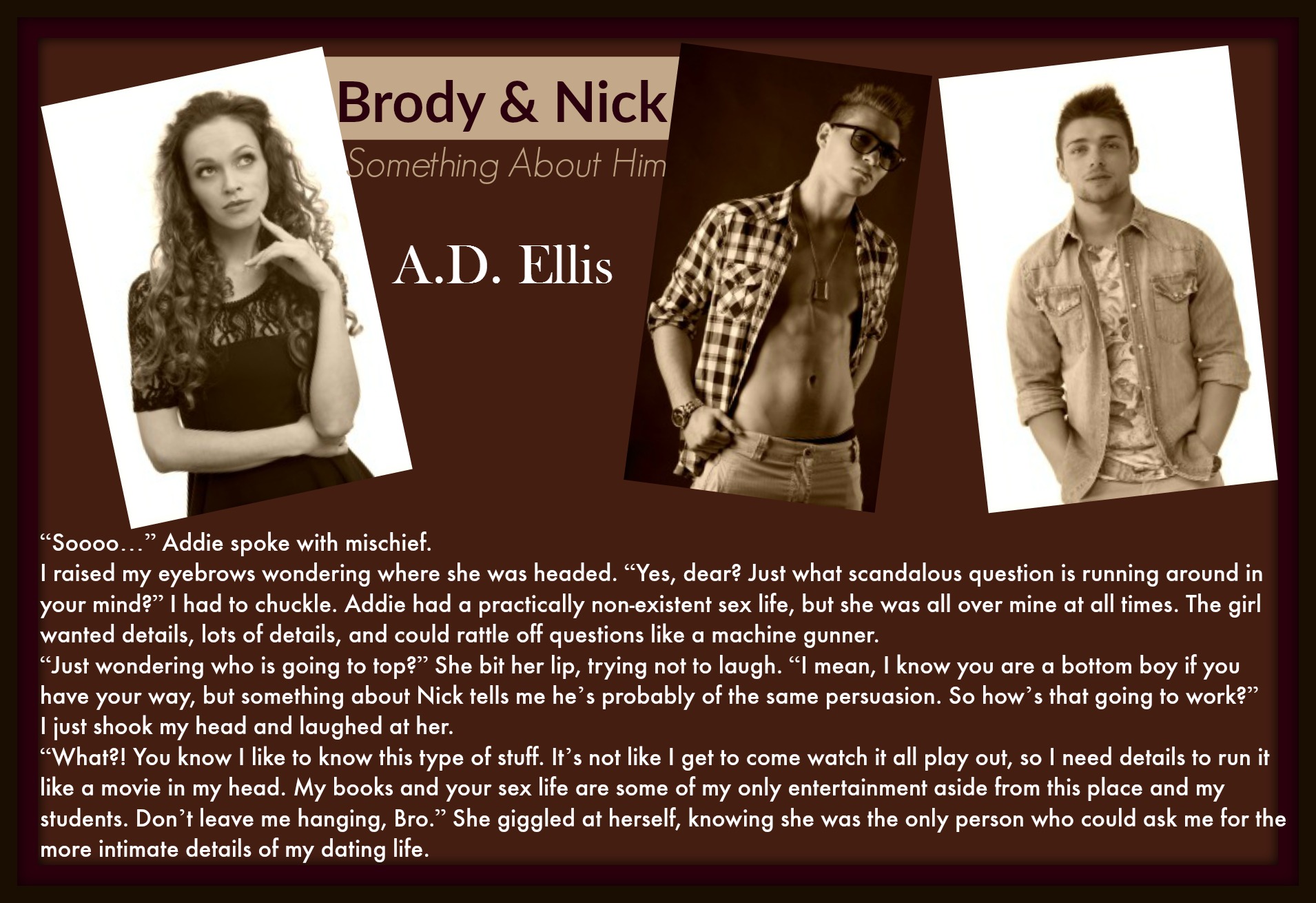 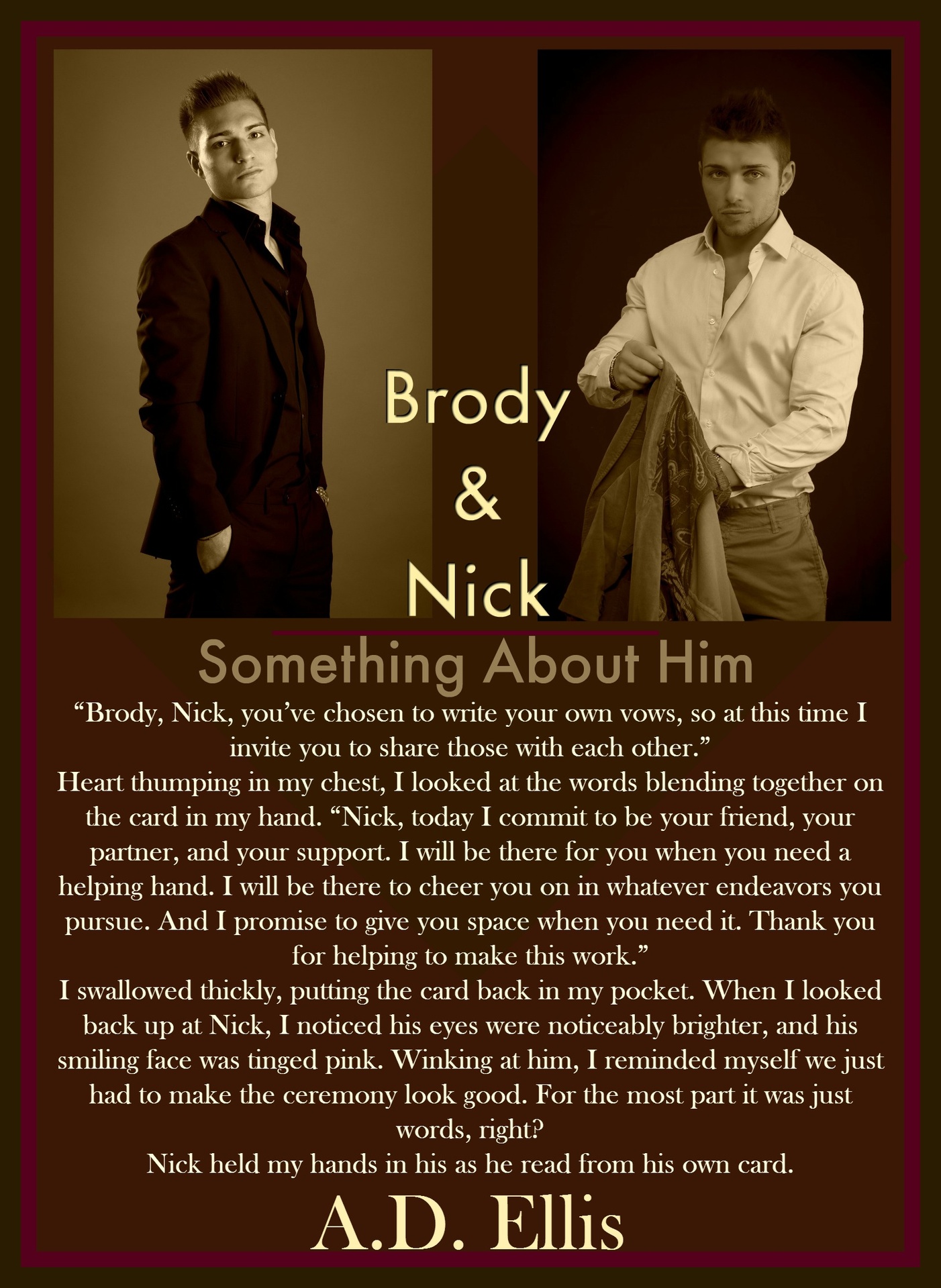 Brody & Nick is now available along with Bryan & Jase in the Something About Him romance series.

Also available on Kobo, Nook, ARe, and iBooks!

I wanted to take a moment to share the new video trailer from Bryan & Jase.

Jase Rafferty grew up hiding his sexual curiosities—until he meets Bryan Keating. Bryan’s sexual preference is no secret, and being deployed overseas together allows the two men to forge a solid friendship. The sexual attraction is undeniable, but after one lust-filled week, they must go their separate ways.

A year later, a chance meeting gives them one more weekend together, even though they know Jase can’t risk his military career or his family obligations to be with Bryan.

Several years pass before Jase finally accepts the desperate longing in his heart and body. But when fear and hatred threaten to tear them apart, Jase must make a tough decision, one that he isn’t sure he and Bryan can overcome. Together, they must choose to weather the storm or say goodbye forever.

**This is a male/male romance meant for ages 18+ due to adult language and adult situations.**

Full-length (on sale, but price will increase!):

Add it on Goodreads! www.goodreads.com/book/show/29420630-bryan-jase If you missed it earlier on the other blogs, here's the cover of Bryan & Jase (releasing April 28!) Scroll down for links where to find this story!

You can preorder this title (and grab the FREE short story as well!):

Also on Kobo and ARe-- Just search A.D. Ellis Bryan & Jase. Will be on Nook after April 28.

I'll be attending the Writers on The River author signing in Peoria, Illinois in July. I'm hoping many of you will come out and enjoy the over 90 authors who will be attending along with me. It's sure to be a great time.

I have lucked out and have TWO general admission tickets available for one lucky winner!

Enter in the Rafflecopter below and winner will be announced in late June.

<><>I'm offering a FREE M/M short story titled The Beginning: Something About Him (all links below)<><>

(Please rest assured I'm going round and round with Amazon about trying to get this short story FREE like it was written to be...they are so far refusing...you may report the iBooks or Nook link if you'd like)

Amazon (only 99¢-- or fill this form out and I'll send you the file directly to read on your Kindle-- http://goo.gl/forms/GmHNVjFnuP)

Also on Kobo and Nook

There are some great teaser pics from Bryan & Jase in the photo gallery.

#Romance for ages 18+ (the book is a standalone, but there are GREAT deals on the first 7 books in the Torey Hope series as well--check them out at author.to/ADEllisAmazon)

So, this idea came to my mind about six hours ago, but I was getting ready to head out to meet my sisters-in-law for lunch and drinks. Now, I'm stuffed full of tacos, sangria, and vodka, so I'm not sure I can get my point across as well as I had originally thought I could. But, here goes.

My sister-in-law died from complications of eighteen months fighting leukemia. She was diagnosed just days after her second baby was born. I've lost count of the number of former or present colleagues who have lost their fight with cancer or have battled and beat cancer. The number of children fighting cancer is overwhelming. Family members and friends have been diagnosed with cancer.

More people than I probably even realize suffer from mental illnesses. Anxiety, depression, bipolarism, schiznophrenia, addictive personality, etc) These people may look and act completely normal, but inside they may be fighting battles we don't even begin to comprehend.

Asthma, diabetes, gluten intolerance, heart disease, cancer, autoimmune disease, mental illness....all of these diseases and disorders are affecting millions of people each and every day and they all have one thing in common. They don't discriminate.

Cancer doesn't pick only on white women or black men or gay men or lesbians or rich men. Autoimmune diseases don't see skin color or  socio economic level or religion. Mental illness doesn't avoid the rich and pick on the poor, or go after the LGBT community while leaving the Hispanic community alone. Asthma doesn't target only white males. Diabetes doesn't single out Jewish or Islamic people. Heart disease doesn't pass over homes of rich men or white Christians. Hell, even the common cold or flu virus will take any and every victim it can get its greedy little germy hands on, it doesn't care if you're black, white, Asian, Hispanic, Jewish, Islamic, rich, poor, man, woman, high IQ or lower functioning.

DISEASE DOESN'T DISCRIMINATE....SO WHY DO WE!?!?

Why do we judge based on skin color or religion or socio economic level or sexuality or heritage or sex? Why is someone good enough for a job on paper until it's determined that person is not the right color or the right religion or the right sex or the right sexuality? Why do we think someone is awesome until we find out their beliefs are different than ours? Why do we make jokes about and say hurtful crude words to people who aren't exactly like us?

Sure, many of us have grown up with preconceived notions pounded into our heads by the media, society, and maybe even our families and friends. But, I'd like to think that most of us are smart enough to realize differences are all around us. Plants and animals throughout the world are different, PEOPLE ARE DIFFERENT too!! Instead of looking at those differences as bad things, why can't we look at the differences as beautiful?  Every shade of skin color, every different belief, every different type of love, every level of intelligence, every DIFFERENCE is OKAY and BEAUTIFUL and should be ACCEPTED (if not at at least tolerated).

Do I understand every religion of the world? No. Have I lived in extreme poverty? No. Do I know what it means to be treated differently because of my skin color? Yes. Do I know what it's like to be treated differently because of being a female? Yes. Do I really have a true understanding of what it's like to be discriminated against? Not likely. Do I understand every different belief in the world? No. Will I ever? No. Can I accept and/or at least tolerate these different beliefs and life-styles? YES!

My goal in 2016 is to continue loving others and to open my mind to more differences. I may not understand them, but you know I'll ask questions about them. I likely won't change my own opinions, but I just might.

So, in closing, if diseases don't give a damn about our differences, why should we?

I'd love to hear from you. Leave a comment with your thoughts on this. 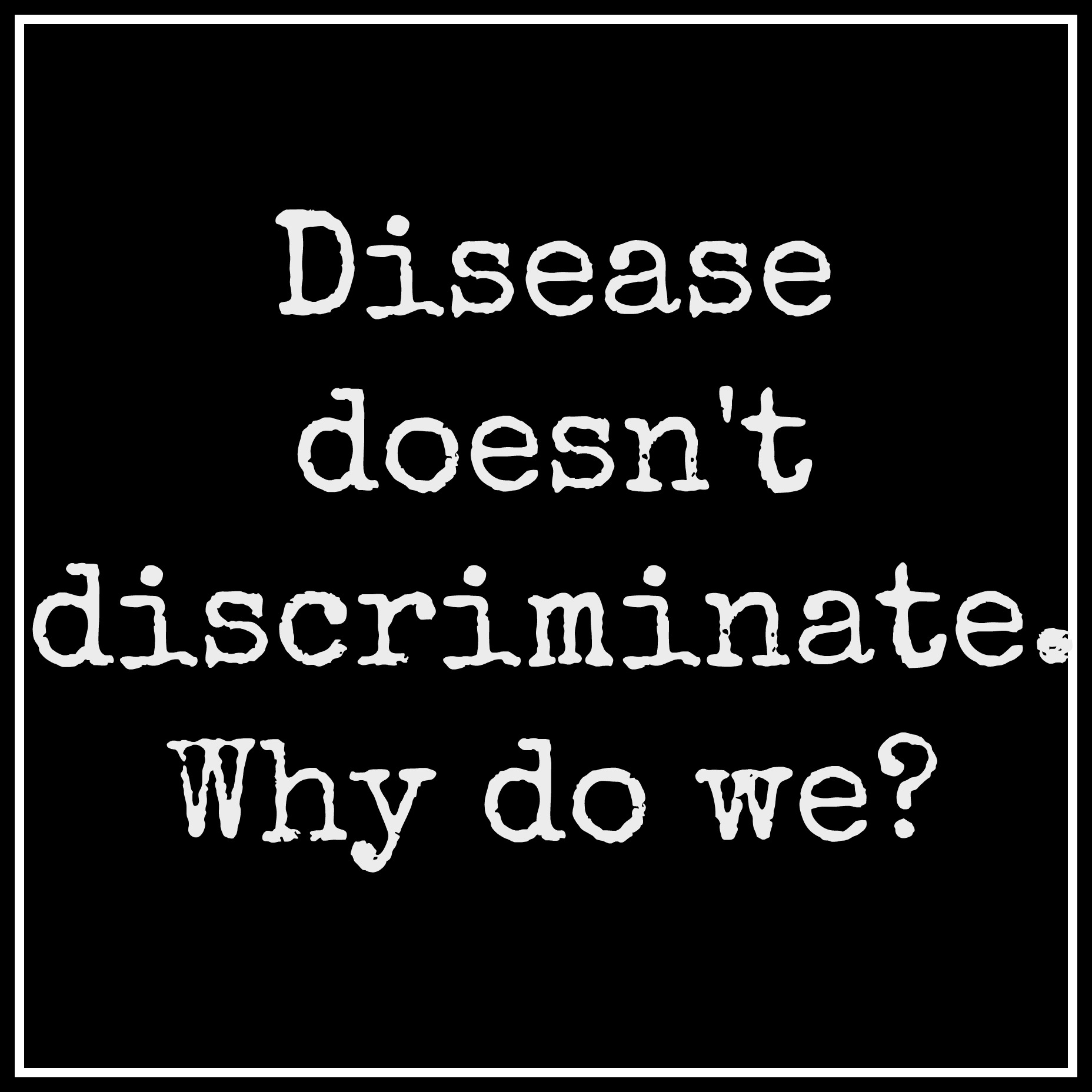